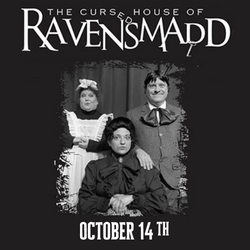 The Cursed House of Ravensmadd: a Musical premiere

What do you call a musical that is Jane Eyre meets Rocky Horror Picture Show meets Monty Python meets What We Do in the Shadows and is like a dark and creepy Oklahoma?

You call it The Cursed House of Ravensmadd! The latest madness presented by Tallahassee’s own original cabaret company, the Mickee Faust Club, is an original work by Faust Artistic Director Terry Galloway and writing partner and wit Stacey Abbott. It’s based upon Galloway’s gothic novel skits, The Women of Ravensmadd, which she started writing while with the Austin, Texas, comedy troupe Esther’s Follies. Over the years, fans of the Mickee Faust Club cabarets have been treated to various installments of Ravensmadd tracing the poor, pathetic life of the thirty-six year-old orphan, Clara, and her sickly younger sister, Pained. But Galloway wanted to do more with these characters.

While writing the story and the lyrics was collaborative fun for Galloway and Abbott, they lacked the critical element to creating a musical: a person to compose the music. But Galloway’s Austin theater roots and her solo performance work paid off when composer Peter Stopschinksi got on board with the project.

While this show is not the usual sketch comedy fare of the Faustkateers, it still has the level of absurdity that Faust audiences will appreciate.

The show features a variety of musical styles from 1980s’s pop ballads to square dancing hoedowns.

And there will be a chicken. In a bow tie, which Galloway noted is to be admired, not eaten.

Ravensmadd is being produced by Mickee Faust, Tallahassee’s “community theater for the weird community” with stage direction by Galloway and FSU Professor, Faust co-founder Donna Marie Nudd; with Project Musical Direction and Musical Arrangement by Ben Gunter; Choreography by Abbott; and with Faust’s Director of Music, Larry McCraw acting as Band Captain.